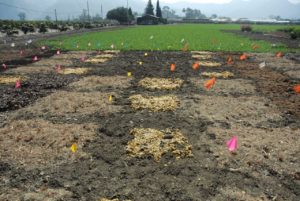 Plants have a cellular pH of about 6.8.  Coincidentally most plants like to grow in soil at about that same soil reaction.  In much of the arid southwest our soils are neutral in pH (7) to slightly alkaline (7.5-8) and sometimes very alkaline >9 on the pH scale.  While many ornamental and crop plants will grow well in our soils there are many plants in the Ericaceae, protea and Myrtaceae families that prefer lower soil reactions.  Some crops like blueberries require very low soil reaction in the 4-5 range for optimum growth and fruit production.  Landscapes with Liquidambar, maple, hydrangea, gardenia and azalea all suffer when grown in alkaline soils and the consequent deficiency of iron, zinc and manganese which are poorly available to many plants when soil pH exceeds 8.

Soils become alkaline in climates where evaporation exceeds precipitation and base cations accumulate in soil. Base cations are calcium, magnesium, sodium and potassium.   In our soils bicarbonates minerals tent to maintain a high soil reaction.  This can be offset by applying sulfur which slowly oxidizes to form sulfuric acid in soils thus lowering the pH.  Over the years, many gardeners and horticulturists have asserted that certain organic amendments such as coffee grounds, oak leaves, or pine needles will acidify soils.  While it is accepted that organic matter will moderate soil reaction (make acid soils more alkaline and alkaline soils more acid)  There has been little study of the capability of these amendments to acidify southwestern soils which are typically contain low amounts of organic matter.

Mr collegue Dr. Ben Faber and I started a study at the Hansen Agricultural Center a few years back with a grant from the Hansen Trust.  The goals of our study was to compare organic amendments and sulfur in combinations to see if the presence or type of organic matter would speed the oxidation of soil sulfur giving a faster pH reduction.  One of the real drawbacks of using soil sulfur is the slow reaction time that is heat dependant.   Our idea was that organic matter which increases soil microbial activity, may help to speed the mineralization of sulfur thus giving a faster pH reduction.  We found our hypothesis was not supported but a different finding was made that is very important for those wishing to acidify their soil.

Our study ran for three years.   The organic amendments we used were lemon fruit, oak leaves, pine needles, yardwaste, peatmoss, and coffee grounds.   These were tilled into 4’by 6’ plots 6” deep with a 50 by volume incorporation rate. Our test plot soil had a starting pH of 7.8.   Amendments were applied with or without soil sulfur so we could see the effect of sulfur alone or with each amendment.

Lemon fruit waste gave the fastest response quickly reducing soil reaction to about 3.  This lasted for a few weeks and then increased gradually over time to the mid 6 range.  None of the organic amendments alone gave a consistent pH reduction beyond one pH unit.  When combined with sulfur every amendment reduced soil reaction more than just applying sulfur alone.     Coffee ground pine needles, and peat moss gave consistent pH reduction below 5.5 after three years.  The rate of sulfur oxidation was not increased by organic matter, but the amount acid produced was.      Generally, soil plots amended with organic materials and soil sulfur developed lower soil reactions than sulfur applied without organic matter.    The take home message is: Use a high quality organic amendment with soil sulfur to get the most out the pH lowering capabilities of the sulfur. 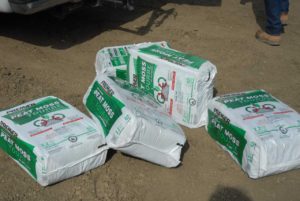 Keeping soil pH in the range of cell sap pH at about 6.8, will allow for the greatest availability of nutrients to trees shrubs and other woody plants.  When minerals are limiting due to high pH, micronutrients such as iron, zinc and manganese will limit plant growth causing stress and perhaps predisposing to disease.