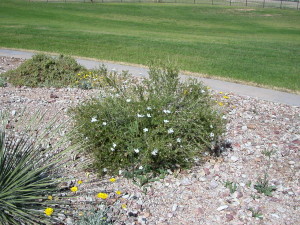 After spending a few days in New Mexico for the annual balloon festival, I noticed Apache plume all over the valley. Seems like the landscapers in Albuquerque are quite fond of Fallugia paradoxa for landscape uses. Sadly, living in the surrounding area of Phoenix, AZ, I rarely see this as a landscape plant. Why that’s the case is unknown to me, but maybe after some of our local landscapers and nurserymen read this, Apache plume will become more available, and used more often!

What makes this plant so desirable is that it is very durable. It can survive the extreme heat of the valley and other low lying, desert regions, and also take temperatures as low as 30 degrees below zero. I personally do not want to check out how they survive a temperature of -30, but I will believe who said that!

So, USDA zones from 4 – 7 are where one might find them growing, but by looking at a map, one will be surprised to see that these feathery delights can be found all across Texas to Oklahoma, west to California and into Utah and Nevada. They are native to our deserts from southern California east to Texas. The Hopi people steep the leaves for a hair tonic.

So there are no excuses why one can’t find a use for this plant in a landscape. As a semi-deciduous to semi-evergreen plant, it can be placed in virtually any garden design.

Growing to a height of almost six feet and spreading to about five feet in width, they are not giants, so they can be used for a variety of locations. Whether they are planted as a foundation plant or a median landscape plant, they fit in easily. While I personally probably wouldn’t use them as a foundation planting, in medians or along sidewalks are ideal spots. They are considered to be moderate in growth rate, so monthly pruning is by all means not required. Perhaps quarterly pruning and of course pruning for traffic clearance are acceptable.

However, if the plant gets too rangy or sparse, it can be cut clear back to the ground and should come back with a nice compact shape. Whatever you do, please don’t shear this shrub!

Locations for the Apache plume are simple, sun, sun, sun! They can tolerate some shade, but they are fine in as much sun as available. In extreme hot, sunny locales, a little bit of shade might be graciously accepted by these lovely plants. However, they will survive and even thrive in reflected heat. They are also recommended for erosion control on slopes.

As a desert native, they will grow in almost any type of soil. In fact, they are recommended for alkaline soils, which most of us deal with on a regular basis. Planted in a rich garden soil full of organic matter, they can get rangy and will produce fewer flowers.

Like most of the plants I have written about, they are true drought tolerant plants. They need an even amount of water after planting provided on a regular basis, like all new plants. Once adapted to an area, they can have the amount of water reduced, and they do tend to fend for themselves.

So, how does one describe the Apache plume? They are easily identified by their lovely little white flowers, about a 1/4-inch in diameter, found in the spring and sometimes in the fall. They have a yellow center to each flower as well.

Once the blooms are finished, they are followed up by a showy stalk a few inches in length. This is where the common name comes from, as the feathery fruit is said to resemble an Apache headdress. These remain on the plant for a while, but if you tire of the look, do a selective pruning and they are gone! As mentioned earlier, they are considered to be a semi-evergreen plant. The foliage is a nice dark green, small leaflet. Between the feathery stalks and the lovely little white flowers, they are easy to identify.

So what plants look nice alongside these? Being a relatively open-looking plant, yet not too open, they can be planted with fairy dusters, rosewoods, desert honeysuckle and Mexican bird of paradise, among many other plants. I like them as an accent plant, but they are great in a wide-open area, planted in mass with other flowering desert flora. Creative minds will allow for a creative landscape. It is hard to go wrong with an Apache plume!

Joe Pearl is a horticulture consultant in Mesa, AZ