The chainsaw is one of the most indispensable tools in modern tree work. About three-fourths of the sales volume in the average tree care company is made from pruning and removals — and this work is not being accomplished with hand saws.

Hand saws, back in the day, were the only means of pruning and they still are an important tool, sometimes more efficient than a chainsaw. But not many of us would want to be cutting large tree limbs all day with one anymore.

The chainsaw has certainly increased productivity, but its misuse is a factor in many incidents involving arborists. Injury is defined as damage to the body as a result of energy exchanges that have relatively sudden discernible effects. This certainly describes an injury involving a chainsaw. 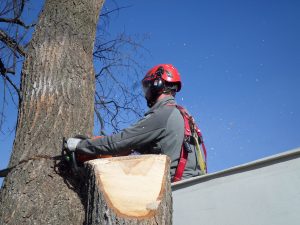 Chainsaws are designed to cut wood, and operators should have training before operating this lightweight and efficient power equipment. The number of chainsaw injuries, from all sources, loggers, arborists, other professions and even homeowners, numbers anywhere from 40 to 90 thousand each year for severe non-fatal, with deaths occurring in another 40 to 60 accidents. Minor chainsaw injuries, ones that may only require simple on-site first aid provided by the crew, are the most common chainsaw incident. However, a good axiom to live by is the saying: “There is no such thing as a minor chainsaw cut.”

A chainsaw operates through an endless loop that moves material from it in a series of chipping actions that really more plane the wood rather than cut it. Anything that can plane wood at 600 teeth per second can certainly cut skin, blood vessels and tendons as quickly as cellulose and lignin.

Laceration is the medical term given for the majority of chainsaw injuries. A laceration is an injury that results in a torn and ragged cut, precisely occurs from chain pulling through tissue. These lacerations can occur from head to toe, though predominate on the left side of the body due to the way the saw is typically held. Lacerations involving a chainsaw are often described as deep and multiple, usually a series of parallel cuts.

The left thigh is one of the most common locations for saw cuts for all but one specialized group of users, the climber. The aerial environment is different from ground work in that incidents occur more often to the upper body, head, neck, shoulders, than to the leg. This change in body region is due to the placement of the chainsaw in relation to the user.

When operating chainsaws on the ground, the user generally is cutting downward, below their waist, so the left leg and foot are frequent targets. Chainsaws operated in the tree are often held at chest height or above the shoulder.

Chainsaws should never be operated above the shoulders; no one can hold a saw from kicking back at that angle. I also don’t recommend cutting at chest level either. We have had too many climbers seriously injured or killed as they are holding the saw at chest or head level and cannot clearly see what they are cutting.

Quite often there is another branch behind the one being cut and the tip of the bar begins planning through this second branch while cutting through the first one. Digging the tip into wood is how rotational kickback occurred and climbers have been partially decapitated by a chainsaw suddenly flying back into their neck.

Climbers should move a little higher in the tree so they are cutting down into the branch where they can see all obstructions. This position can also reduce the chance of striking the body.

However, regardless of where you are positioning the chainsaw in a tree, before you start think; “Where is the chain going to go if it kicks back?” You might decide to try to make the cut from another angle once you consider the possibilities.

You also must run the chainsaw with both hands regardless of whether you are a climber, aerial lift operator or cutting on the ground. While the Z133 has an exception for one-handed use, there is a proposal to eliminate this exception in the 2017 revision.

The exception was that one-handed use was allowed if it could be demonstrated that in that particular instance that it was the safest way. However, the exception became the rule and too many arborists were cutting one handed when clearly it was NOT the safest way. Lacerations to the left arm and shoulder are the most common chainsaw cuts to climbers and aerial lift operations and those all come from one-handing the saw.

You also might consider finishing cuts with a hand saw. Another Z133 proposal is to require all climbers and aerial lift operators to carry a hand saw with them. These can be handy tools to cut your way out of a problem, such as a cut branch falling back on you. However, there can be another valuable use for this saws, finishing the cut. 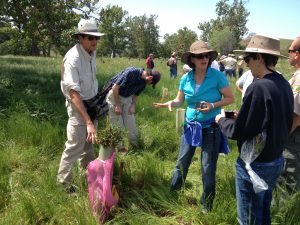 I have moved to starting many of my cuts with a chainsaw but finishing them with a hand saw. I have more control of the piece and I can hear everything going on around me. It does take slightly longer to add this extra step, but the added safety is worth the time.

The fact that chainsaws can cut wood at the speed they do should clearly give anyone an idea about the importance of safety. Everyone that uses a chainsaw needs to have training on their proper use. However, sometimes, despite our best efforts, something goes wrong and the chain follows a path that ends with us.

Always position the saw to reduce or eliminate the possibility and ALWAYS wear the proper PPE. It is your best and last protection. Wear it; all the time.

John Ball is a Professor of Forestry at South Dakota State University where in addition to other duties conducts research in tree worker safety. He is also an emergency medical technician.

← Texas Sage Success
The Nature of Motivation: A View From the Forest Floor →