Few plant types inspire more ire from the professional landscaper or the seasoned Southwest gardener than the thought of intentionally planting a prickly pear (Opuntia spp.) or cholla (Cylindropuntia spp.) in a garden. Yet not many other native or near-native plants can offer as much living sculpture or dramatic form for the desert landscape than, for example, the upright shape of an Indian fig, Opuntia ficus-indica, against a burnt-orange garden wall. Nothing suggests a true desert garden like the huge mounding mass of Englemann’s prickly pear, O. engelmannii, or the incredible golden glow of the back-lit spines from a teddy bear cholla, Cylindropuntia bigelovii, at sunset. The intense purple pads of a Santa Rita prickly pear, O. santa-rita, with their contrasting yellow flowers is a classic iconic Arizona image!

…I can hear the incredulous sigh of a thousand landscape professionals!

Seriously though, there are any number of benefits to growing prickly pears and chollas in a designed landscape. For the majority of species, few plants can compare or compete with the vibrancy and sheer mass of flowers displayed during March and April.

I recently showed a picture of a native blooming beavertail cactus, O. basilaris, with its ruffled and glowing neon-magenta flowers, to a newly transplanted Easterner and he was stunned to learn the that color was actually real. To this day I still marvel at the four-inch-diameter yellow and red throated flowers of the Purple Prickly Pear, O. macrocentra, in my garden.

I’ve also come to appreciate the hardiness of prickly pears and chollas, particularly those from North America. The intense winter freezes experienced in recent years here in the desert southwest was heart-breaking for many of us. I don’t like to remember the losses I had of Agaves as well as columnar and globular cacti in my garden, yet the prickly pears endured, unscathed by the subfreezing temperatures.

Few succulent plants are as drought-tolerant as many prickly pears and chollas once established. Neighbors of mine have a bunny ears cactus, O. microsdasys, growing in an old horse trough by their entry gate. It never receives an ounce of water except when it rains. I watch the poor thing shrivel and lay down during excessive dry spells and then perk right back up after one of our infrequent downpours. They truly can be tough as nails!

Of course one of the down-sides is, like the majority of cacti, they have spines. And not just any old spines mind you, but barbed spines! They pierce a glove or the skin far easier than they come out!

Prickly pears often come with another defensive mechanism, glochids. Those are those tiny, almost invisible spines, that dislodge, get in to clothing and cause insane itching as if you’d rolled in a bale of fiberglass. As a matter of fact it’s the glochids of prickly pears that many years ago were used in gag-gifts such as “itching powder”…nice gift, huh?

Needless to say handling these plants with the appropriate tools, and respect, is necessary to avoid an unpleasant experience. But talk about a very effective living security fence!

Prickly pears and chollas are typically pest free but there are a few scales, mealy bugs and other maladies that can afflict them. The most common is the cochineal scale (various species of the Dactylopiidae Family) that are visible as white, cottony masses on the pads of prickly pears. These were once intentionally cultivated on prickly pears by Native American and Mexican tribes for the bright crimson dye they produce. Like any sucking insect they can weaken an otherwise healthy plant when occurring in large masses. Numerous over-the-counter treatments are available, though repeat applications are often necessary to ensure thorough eradication.

A critical factor when designing with Opuntia species is to give them enough space in the landscape. There are forms and sizes to fit nearly every garden but careful selection is necessary. Many are bushy and get quite large sprawling horizontally like Opuntia engelmannii, O. phaeacantha, O. rufida, O. santa-rita, O. strigil, to name a f 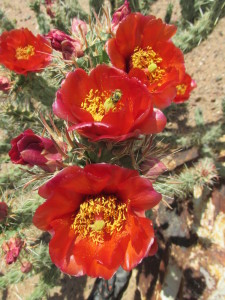 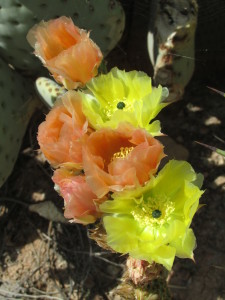 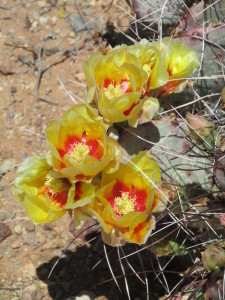 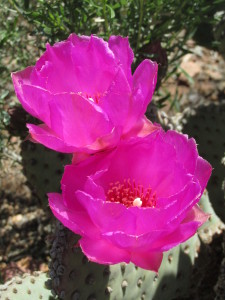 ew. Providing them a space eight to 10 feet in diameter is not unreasonable.

Many of the chollas are more upright but still deserve a similar spacious environment like Cylindropuntia acanthocarpa, C. bigelovii, C. fulgida, C. spinosior, etc. Obviously distance from pathways is

paramount and placement in spaces used by children or pets is to be avoided. Simply put be sure to place them where they have to be fussed with as little as possible.

In the back garden space where the setting sun back-lights the spines and produces a glow few other plants can achieve they are a special feature indeed! Sculptural form, color, abundant flowers, durability, the Opuntias have it all!

Steve Plath is a field supervisor for RECON Environmental Inc. and vice president of Signature Botanica LLC in Morristown, AZ.