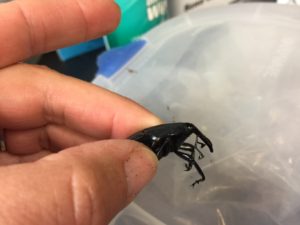 The South American palm weevil (SAPW), Rhynchophorus palmarum, was discovered in a canary island date palm (Phoenix canariensis) in San Ysidro, southern San Diego County in March of 2016.  Since then, nearly 150 additional canary island date palms have been destroyed from this weevil, stretching from the US/Mexico border northward to Chula Vista.

The biology of SAPW is similar to the red palm weevil that was eradicated from Laguna Beach, Orange County, between 2010-2012. The adult of the South American palm weevil is approximately 1 ½” long, all black in color, with small hairs on its body (Figure 1).  The larvae range from 1-5” long and pupate in a 3” fibrous cocoon (Figure 2).

The SAPW, native to Mexico and Central and South America, destroys the apical growth of the palm by feeding on the growing tissue in the palm crown, eventually killing the palm. In palms infested with the SAPW, the top of the palm crown with will become flattened from the new emerging fronds dying first (Figure 3).  This differs from the symptoms of fusarium wilt, which causes dying of lower fronds first.

Other symptoms include yellowing foliage , feeding on the fronds, and holes and tunneling in the base of the fronds. Signs of the pest include accumulated frass (insect excrement) at the base of the leaves and pupal cases on the ground near the tree. In addition to canary island date palms, the South American palm weevil is also known to attack coconut palms, date palms, and the king sago palm in the cycad family.

The SAPW is currently being monitored with baited traps in the southern part of San Diego County.  It is believed that the spread of this pest can be delayed with the fast detection and removal of infested trees. Chipping, burning, and burying infested material deeply can reduce the likelihood that SAPW will emerge and escape from infested palms.

Keeping the palms healthy, reducing pruning activity, and the use of a systemic insecticide may prevent infestations of the SAPW.  However, research is still ongoing for the most effective control method.

To report a palm displaying SAPW symptoms in San Diego County, please call the County Department of Agriculture, Weights & Measures Insect/Bee Hotline at 1-800-200-2337.  If the affected palm tree is in another county, please contact your local agricultural commissioner’s office.

← Using Soil Temperatures to Manage Turf Pests
Turn on Your “Green Light”: Take a Fresh Look at Your Business this Spring →