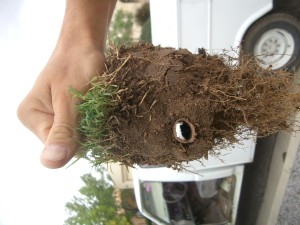 A cut through a drip line under bermudagrass. There is extensive rooting all around the drip line but there are no roots inside. The drip line is clear.

Sprinkler systems are the most commonly used irrigation systems for turf-dominated landscapes despite their inefficiencies due to losses from run-off, wind drift, and evaporation. Subsurface irrigation systems, on the other hand are considered to irrigate more efficiently as they apply water directly to the rootzone, thereby avoiding problems such as overspray, runoff, and wind drift.

Subsurface drip systems (SDI) irrigate either from a point or a line source installed at shallow depths, and interest in these systems has evolved since the late 1970s and early 1980s. The benefits of SDI have been documented for agricultural and horticultural crops as well as trees.

Subsurface drip irrigation systems irrigate more efficiently because they apply water from emitters placed within the rootzone. Advantages of SDI include the uninterrupted use of the turf area during irrigation, energy savings as a result of lower operating water pressure, no human exposure to irrigation water, reduced disease pressure, and potential water savings because irrigation is limited to the turf area and is not affected by wind drift or evaporation.

The suitability of SDI for turf was first demonstrated 40 years ago by Dr. George Snyder (1974) but the technology has never gained significant market acceptance. However, SDI has recently begun to receive greater attention in the context of water conservation and has been mandated by some water agencies for narrow and irregularly shaped turf areas.

Research conducted at New Mexico State University investigating various aspects of managing subsurface drip irrigated lawns has shown that turf irrigated from a SDI system can be fertilized with granular fertilizer without a loss in color or quality. If sufficient soil water is present, nutrients from the granule will become plant available regardless of whether water is applied from the surface or subsurface.

However, most large turf areas with an SDI system have an injection system and apply liquid fertilizer. Home lawns can also be fertilized with a hose-end foliar/liquid fertilization system.

Core aeration can be applied if the drip lines are installed below the penetration depth of the core aerator. Deep tine aerification cannot be conducted on turf with SDI. 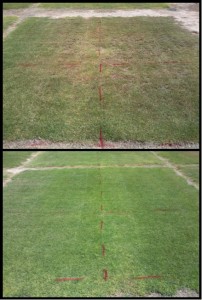 Comparison between bermudagrass that has been irrigated for 3 years at 50% of ETo. Drip irrigated bermudagrass has much higher quality (better visual appearance) than sprinkler irrigated. The plots were next to one another.

Our studies have also shown that SDI sytems are less effective than sprinkler systems at leaching salts from soils in the absence of adequate rainfall, particularly for rootzone depths above the drip lines and salinity accumulation can reach higher levels in drip-irrigated turf compared to sprinkler irrigated. However, warm season grasses seashore paspalum, bermudagrass, and inland saltgrass, and cool season tall fescue did not exhibit a decline in summer quality despite these salinity fluctuations in the rootzone even in a desert environment.

Another question that we get asked frequently is about the cost of installing SDI. This question cannot be answered with a single number, as cost for material and installation (labor) depends on the soil type, and size and shape of the area to be irrigated.

Subsurface Drip Irrigation systems for areas that require a large number of connections to the header lines can be significantly more expensive than a pop-up sprinkler system for the same area. However, a SDI system for areas with only few connections to the header lines (e.g. long and relatively narrow areas of turf) can be cheaper than a sprinkler system.

There is no data available on the longevity of SDI systems. Our SDI systems to irrigate the research plots all have filters (disk, screen, or sand – regardless of the water quality applied) and flush valves to prevent clogging from sediments or other particles. Potential root intrusion can be addressed by using either ROOTGUARD® technology (e.g. Toro DL2000®) from Toro or the TECHFILTER® system from Netafim. Our oldest SDI system was installed in spring of 2003 and is still working fine.

← A Message from our Editor, Helen Stone
Water Conservation and Design →