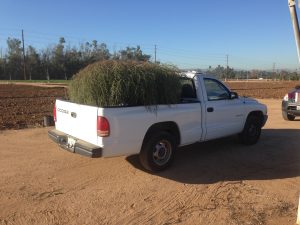 Shana Welles found this tumbleweed in Riverside and put in the bed of her pickup truck. Credit: UC Riverside

The UC Riverside researchers believe Salsola ryanii is likely to become an important invasive species that could spread beyond California to other states.

“Given how quickly it has spread, this species has the potential to be a problematic invasive,” said Shana R. Welles, who is currently a post-doctoral fellow at the University of Arizona but did the tumbleweed research as a graduate student at UC Riverside. “We want to make sure people know that and try to manage this species when it still had a relatively narrow range.”

Welles outlined the findings in a just-published paper co-authored by her Ph.D. advisor, Norman C. Ellstrand, a professor of genetics and a member of UC Riverside’s Institute for Integrative Genome Biology. The paper, “Rapid range expansion of a newly formed allopolyploid weed in the genus Salsola,” was published in the American Journal of Botany.

The UC Riverside researchers did their field work in 2012, collecting tumbleweed from 53 sites throughout California. They found the new species at 15 of those sites. They found it throughout the Central Valley, but also in coastal areas around San Francisco and as far south as the Ventura area.

The results strongly contradict predictions in earlier studies that Salsola ryanii would not likely become invasive.

Salsola ryanii is an allopolyploid, an organism with two or more complete sets of chromosomes derived from different species, formed via hybridization between two other invasive tumbleweed species: Salsola tragus and Salsola australis. (Allopolyploids are not rare among plants. For example, wheat and cotton are also allopolyploids.)

Salsola australis is invasive in California and Arizona and is likely native to Australia or South Africa. It was not recognized as a distinct species until 2000.

Salsola tragus is a problematic weed in 48 states, according to the U.S. Department of Agriculture, and has been described as having the most rapid spread of any introduced species. Its native range extends from north Africa and western Russia, through Asia into northeast Siberia and northeast China.

The three species of tumbleweed are not distinguishable to the average person, said Welles, who earned her Ph.D. from UC Riverside in 2015. She used DNA testing to determine the species of the samples she collected.

The researchers believe the population expansion of the Salsola ryanii species is due to two reasons: dispersal of seeds from individual plants due in large part to the “tumbling” phenomenon and multiple independent hybridizations of the two original tumbleweed species. The researchers concluded: “Salsola ryanii has undergone a dramatic population number expansion in the decade since it was originally documented. We are not aware of any plant neospecies whose range spontaneously experienced such a dramatic expansion. Salsola ryanii has every indication of being just as invasive as its highly invasive parents.”

Future research will further examine this issue. The research was funded by grants from the National Science Foundation.

Pervasive grass introduced for soil stabilization and livestock feed; Potential to severely alter Arizona’s desert landscape due to fire-carrying capability; Regrows quickly and outcompetes to replace native plants in disturbed areas. Dispersal by windblown seeds and rapid spread along roadways into the desert and rangelands/pastures.

in rangelands/pastures; Grows and spreads in dense, impenetrable stands; Toxic to horses; Introduced to southwest as contaminant in grain seed. Dispersal by livestock, roadways, contaminated seed, and vehicular travel.