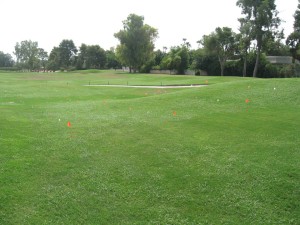 A strategy can be implemented to control the purple nutsedge (Cyperus rotundus), the “world’s worst weed.” Due to regulatory constraints from the U.S. Environmental Protection Agency, only the use of MSMA (monosodium methylarsonate) herbicide on golf courses, sod farms, and highway rights of way may be allowed to continue indefinitely. MSMA has NOT been permitted for use on residential turf since December 31, 2010.

The directions for using MSMA on golf courses allow only one broadcast application on newly constructed courses. Applications on existing courses are limited to spot treatment only. On sod farms, two broadcast applications are allowed per crop. A buffer strip is required for fields bordering permanent water bodies. Read and follow specific instructions on MSMA product labels.

The U.S. EPA agreement limiting MSMA use and casting uncertainty for the future has altered the approach to controlling nutsedge economically in turfgrasses in the desert for the long-term. MSMA has been an inexpensive tool for initiating purple nutsedge control when it first emerges in turf during the spring through early summer. It causes rapid foliar chlorosis followed by desiccation.

MSMA has no preemergence soil activity and requires multiple applications against the newly emerging nutsedge. These continuous applications before the summer solstice (June 21) should begin exhausting the underground tubers of carbohydrate reserves as they expend energy to constantly put out new shoots that get burned down by the MSMA.

Another herbicide to consider and use for replacing MSMA may be the use of Dismiss CA* (sulfentrazone) that causes somewhat similar nutsedge leaf burning when applied postemergence. The duration of the resultant burndown can last 7 to 14 days but in tandem with constant low mowing, nutsedge populations can be stressed.

Following the early season applications of MSMA and Dismiss CA along with mowing, at the end of June and around the 4th of July holiday, the highly effective ALS-inhibiting (acetolactate synthase enzyme) herbicides should begin to be applied for postemergence control of the purple nutsedge. The commercially available ALS-inhibiting herbicides that control nutsedge are SedgeHammer* (halosulfuron), Image* (imazaquin), Monument* (trifloxysulfuron), Certainty* (sulfosulfuron), and Katana* (flazasulfuron) (Table).

Newer combination herbicide products can be included at this timing of application – Tribute Total* (halosulfuron plus foramsulfuron [Revolver*] plus thiencarbazone) and Dismiss South* (sulfentrazone plus imazethapyr). Imazethapyr is a related herbicide in the same family as Image.

The timing of applications of these herbicides takes advantage of the shortening day-lengths when it is expected of perennial weeds to begin translocating photosynthates to the developing tubers. The ALS-inhibiting herbicides effectively penetrate the foliage and move to the developing tubers and prevent their further development and maturation. Results of several nutsedge control experiments conducted with these products are available in the University of Arizona College of Agriculture and Life Sciences annual publication Turfgrass, Landscape and Urban IPM Research Summary (http://turf.arizona.edu).

The “1-2 punch” of MSMA/Dismiss CA followed by an ALS-inhibiting herbicide should effectively begin to reduce purple nutsedge populations in turfgrasses. Of course, the degree of the infestation and turf management practices will contribute to the level of control achieved. A thick and high population of nutsedge and high soil moisture content will make it more challenging to reduce the infestation.

Generally, most of the ALS-inhibiting herbicide labels recommend a sequential application at 4 to 6 weeks after the first application. SedgeHammer and Image might provide only 2 to 4 weeks of control and then needing a second application sooner. Monument, Katana, and Certainty have given longer intervals of control beyond 4 to 6 weeks.

Additionally, do not expect some of the ALS-inhibiting herbicides (also commonly referred to sulfonylurea [SU] herbicides) such as Monument or Katana to control nutsedge when applied at lower rates used to remove overseeded ryegrass during spring transition. The sub-lethal dose for nutsedge control will contribute to the chance of herbicide resistance development.

The MSMA/Dismiss CA applications followed by ALS-inhibiting herbicides is an effective strategy of multiple postemergence applications when used in combination with low height of cut and frequent mowing. Preemergence herbicides generally offer better yellow nutsedge control and not against purple nutsedge. Pennant Magnum* (s-metolachlor) and Tower* (dimethenamid) generally will not provide acceptable control of purple nutsedge. Dismiss CA and several other pre-mix products that contain sulfentrazone – Surge*, Q-4Plus*, and Solitare* might offer better yellow nutsedge suppression or reduction. These sulfentrazone-containing products may only cause temporary and slight burning of nutsedge foliage.

Nutsedge control in turfgrasses requires patience and diligence. It will take several years of attention and properly timed applications of contact and systemic herbicides in tandem with frequent low height of cut mowing and efficient irrigation management. Eventually, acceptable and manageable levels of nutsedge will be achieved.

← A Message from our Editor, Helen Stone
Professional of the Year: Diana Maranhao →