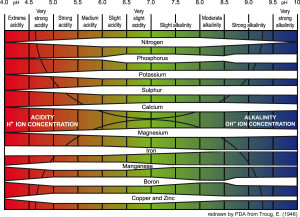 So we do live in interesting times. It’s a curse. While we put down an incredible amount of synthetic fertilizer yearly, organic materials gain in popularity by the day. I was raised in the university system; I can understand most of the science behind nutrients and fertilizers, the plant essential elements. How synthetics are raw elements formulated usually as salts and how organic matter is nothing different than dilute raw elements with carbon…but still…

The desert southwest is almost devoid of the nutrient needed in greatest amount by trees — nitrogen. Nitrogen comes naturally from living things now dead and in or on the ground, and for some plants from the nitrogen gas in the atmosphere.

While a good soil has around five percent organic matter (formerly living things), ours usually has much less than one percent. But our native plants are seldom nitrogen chlorotic (yellow); they don’t need applied nitrogen to perform well. In fact, there is strong evidence that giving nitrogen fertilizer to legumes (many of our desert tree species are legumes) doesn’t help, nitrogen fertilizer damages the bacterial symbionts on the roots and the tree is actually weakened. There is controversy whether nitrogen fertilizer also disrupts mycorrhizal function.

Nitrogen fertilizer comes in many forms and strengths. The insoluble forms are utilized in controlled or time-released packaging to issue nitrogen a little at a time so the product doesn’t spike at the occasion it is applied. Organic nitrogen is usually slowly released but the application delivers around two percent rather than the seven, 14, 21 percent or even larger amounts of synthetic nitrogen.

We should just use more organic matter…and consider nitrogen first and foremost for non-native plants. Remembering always that it needs water to be washed into the rootzone before it volatilizes back to sky.

Nitrogen is a macronutrient; plants use it in larger quantities compared to micro amounts. Phosphorus and potassium are also macronutrients.

We should know that phosphates are very insoluble but may not know that it has limited availability in alkaline soils, about 60 percent of the time here in Arizona, but it is ever deficient in trees? If you never apply phosphorus and your trees never show symptoms, forget the TreblePhos.

Phosphorous supposedly improves roots and flowering because it inhibits shoot development, but you can attain similar results by not using nitrogen. In that vein the ANSI A300 standard part 2 recommends fertilizers with a nitrogen ratio about three times that of phosphorous (3:1).

Potassium, found in manure fertilizers, can be but is seldom deficient in trees. Our A300 recommendation is a ratio of three times the nitrogen to one potassium, or 3:2 even, and as much as 3:3 in palms. A complete fertilizer might look like 27:9:9 (3:1:1), perfect for many maintenance fertilizer needs.

Use soil tests, then you can have a better idea what to apply and how much.

The secondary macronutrients are calcium, sulfur and magnesium; they are not needed in the plant in as large amounts as the three primary macronutrients. Calcium is an odd nutrient here in the desert. It is everywhere as caliche, calcium carbonate. Calcium is not deficient except in acid soils – are you kidding, acid?

Sulfur, which may never be naturally deficient in any soil, is useful here as a soil acidifier. It will briefly convert to sulfuric acid helping other bound nutrients to be released temporarily and hopefully taken in by tree roots. Or so we wish. We’re sure that our soils act as antacids and putting down some sulfur will not permanently change the soil pH. Sulfur should be considered as part of a fertilizer program. Please remember that ratios of all nutrients are important and over utilizing one can disrupt the uptake of other nutrients.

Iron is the micro-nutrient needed in the largest amount compared to the other micros so it is the one most often diagnosed as deficient. Iron is often deficient in heavily watered trees such as those in a lawn, in temperate trees which thrive in neutral soils and in many of the Australian plants not comfortable in calcic soils.

Chlorotic trees die slowly due to lack of iron. Alkaline soil and water are to blame; seldom lack of iron. Ferrous sulfate or vitriol is a fairly good iron fertilizer as are many of the chelated irons.

Zinc is the micronutrient most often deficient in fruit trees, so pecans and citrus are often on a program. Zinc sulfate is commonly used; more expensive zinc chelates are available. Yet again the use of sulfur salts.

Manganese fertilizer is also often necessary in fruit trees and pines, seldom lacking in native trees. Manganese is soluble as a sulfur salt but is also chelated.

Occasionally the least of the micronutrients like boron and chlorine can be so plentiful they are toxic. Boron toxicity has become more interesting to us in palm culture recently.

Applying fertilizer can be interesting. Most fertilizers need to be watered into the upper soil levels at application to be useful. Merely broadcast they will sit on the surface or become fixed before they are taken up. Mounding at drip emitters creates concentrations above plant tolerances.

Applying the micronutrients along with acidifying nitrogen fertilizer is very appropriate. Timing fertilizer applications is necessary for proper uptake. Most fertilizers are less effective in cold weather when roots don’t take them up rapidly.

Many applicators swear by specialty organic fertilizers in small amounts. Several local nurseries bag, box and sell their own special blends. This not surprising since nurseries spend a lot of time working on improving plant in their care. What is surprising are the small amounts prescribed for plantings and even maintenance.

Juan Barba is a consulting arborist in Tucson, AZ. He is the president of Juan J. Barba & Associates. Barba can be reached at 520.622.6938 or e-mail juanbarba.arborist@gmail.com.