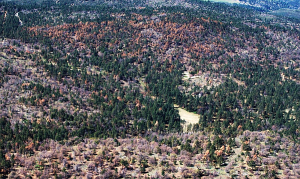 Extreme drought conditions have left an estimated 12 million trees dead in California’s forests over the past year.

KPBS-FM reports that the estimate comes from a U.S. Forest Service aerial survey conducted in April.

Interim Aerial Survey Program Manager Jeffrey Moore says 82,528 trees in San Diego County are dead from lack of rainfall and many more are struggling to survive. He says a tree’s survival often depends on its proximity to other trees, which are competing for any moisture available.

The study shows that Jeffrey pines are particularly hard-hit by the lack of water.

Those large trees store carbon from the air and provide food and habitat for squirrels, deer and birds.