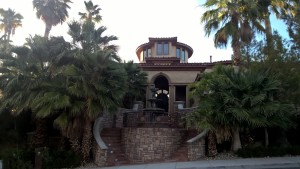 The front of a foreclosed home is shrouded in palm fronds.

While pet sitting for a friend out at South Shore of Lake Las Vegas early in the month of May, I was taking the little man for his evening walk when we came across a house lost to foreclosure. I was immediately intrigued by the jungle of plant material left untended for what looked like years. Someone had enough wherewithal to continue to irrigate the property, but there didn’t appear to be much other maintenance – virtually no pruning, I was happy to see.

The home I care take in Blue Diamond requires very little pruning and certainly no shearing. I do not lift up the skirt bases of desert spoons, nor do I round the Leucophyllum and Pittosporum. And I’ve seen very few properties in Vegas that allow plants to grow in a natural shape…..until I found this little abandoned gem.

As a horticulturist returning to the Vegas valley area less than two years ago, I am overly annoyed by all the excessive and incorrect pruning of the local plant material. It was a delight for me to see plants at this abandoned home left in their natural shape. Phantom and I decided to go in for a closer look and to snoop around a bit.

All palms (Phoenix, Washingtonia, Filifera) had large healthy full heads with very few browned fronds. The overall look of this full palm canopy was that of Miami – where palms are revered and treated with much more respect. The front of the house was enveloped in massive green fronds– artfully shielding the house, while providing shade and native habitat for local wildlife.

The back of the property consisted of a expansive retaining wall with several tiers of gardens within the tiers and an arching bridge walkway connecting two separate outdoor pool and pond areas. Within the retaining wall planters were Mondel pine, Pfitzer junipers, California pepper trees, and more palms. Lady Banks rose and rosemary cascaded over the planter walls, spilling into a natural cascade of green.

The base retaining wall area in the back of the home consisted of Mesquite trees, Pfitzer juniper, Acacia redolens and deergrass. I was finally witnessing an unsheared grouping of Pfitzers – with their lovely arching “arms” of green and skirts left to touch the ground.

And I’ve never seen a healthier and more functional mass of Acacia redolens – a sprawling, prostrate, groundcover shrub for expansive spaces such as embankments. This plant is often used on steep inclines to prevent erosion and carpet the slope with dense growth. Native to western Australia, it is remarkably suited for the desert but here in Las Vegas, it is often sheared and abused due to continued overly aggressive pruning.

Within the courtyard areas there were clumps of untended bamboo – left to thrive and do what bamboo does…frolic and sway, provide tropical screening and a sense of paradise. Lady Banks roses, again left to arc and reach for the sky, I’m sure were recently laden with millions of flowers — a sight that had to be stunning to witness in early spring.

The groundcover in these areas consisted mostly of asparagus fern, which were lush and extremely vigorous, whereas the few remaining Raphiolepsis were scraggly, sparse and obviously suffering from lack of attention. Other plants that were not happy to be left alone were the Dietes, Italian cypress (loaded with spider mites) and dwarf Nandina. 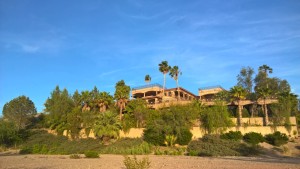 The back of the home has masses of unpruned Pfitzer Juniper and Acacia redolens.

We continued to wander back into the front yard, preparing to extend our walk down to the lake, and I immediately noticed the contrast of this “neglected” landscape with houses and “gardens” either adjacent the property or on the same street. Just across the road, I found a Pfitzer juniper whacked back and sheared flat – obviously due to an unsuitable location too close to the curb and mailbox. There was absolutely nothing attractive about the sheared version of the Pfitzer and was in total contrast to the ones on the abandoned site – these were just another mass of green cubes with no grace and little character.

Two lots further down the street I came across the exact opposite of the lush landscape I had just left. This house was imposing and sparse while the landscape was “immaculate”…meaning it was over trimmed, tidy, conforming and offering not an ounce of welcoming.

My head was very busy the next hour or so as Phantom and I continued our walk. I couldn’t get over what I had felt and witnessed in that under-served landscape. It confirmed what I already knew – that plants can survive, indeed thrive, when left to their own care. That plants really don’t need to be tended as much as we would like to think they do.

I enjoyed the sense of enclosure and the unruly, unkempt look of nature. And I’ve seen so little of it here in our urban desert setting where houses have virtually zero lot lines – literally sitting three feet from the cinderblock wall and another three feet from the neighbors’ bedroom window. Who would have ever thought that one solution to lessen the loss of privacy when living in high-density settings would be to love the garden a little less and neglect the garden a little more!?!

Shirl McMayon is an account manager for GTI Landscape, in Las Vegas, NV and an ISA Certified Arborist.

← Oleander: The Good, the Bad and the Ugly
Sustainable Pruning Practices →