It is about time someone came to the defense of the poor old Nerium oleander. Is it my favorite plant? No. Do I hate it? No! So why, you might ask, am I going to spend the time to discuss this plant? 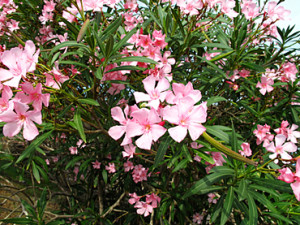 Sure, it has been used in the Southwest for years, usually with decent results. So easy to grow and so reliable that many roll their eyes at the thought of it. Sadly though, it has been getting crushed by diseases and pests. To make matters worse, there is no control for either of the two major ailments that are affecting these plants.

Before getting into the nitty gritty of what is eradicating the common oleander, how about a little history of the plant.  Oleander is from the dogbane family of plants. Due to its widespread cultivation, there really is no proven location of where it may have originated from! It can be found growing throughout Asia, Europe, South America, and in the United States. It can be seen growing as far north as Washington DC, and throughout the western states. Hi has been especially popular in the Southwest, where it is used in so many landscape situations.

Growing to a height of up to 20 feet, it can be a bit gigantic in scale. Keeping them trimmed to a nice size is going to more than likely force out more blooms, which is without a doubt the best value of the plant (in my opinion!). There are dwarf versions of oleanders that do not mention these massive heights for even less maintenance required. 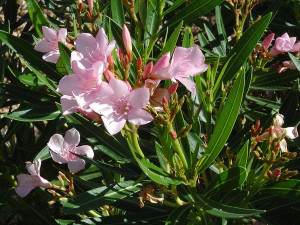 The deep dark green foliage provides a nice aesthetic background to the massive amounts of flowers, which seem to last for months. Pruning oleanders can be done the way the ‘old-timers’ say, “When the saw is sharp!“

One major factor to always keep in mind when using oleanders is that they have been known to become invasive with their pesky root system. Somehow, the oleander seems to know how to creep into a water line or even worse, a sewer line. Proper planning will solve this issue.

According to Rich Myers, a long time employee of Berridge Nursery in Phoenix, AZ, and virtual wealth of knowledge of plants in the Phoenix area, when properly maintained oleanders are a spectacular landscape plant. He states that when oleanders are planted in masses and are in full bloom they are a sheer pleasure. Whether it be the whites, pinks or reds, when in bloom and working as a border or screen, there is no better plant to use.

So, what is it that is killing these antiquated beauties? There are a few major contributors to this. The Glassy Winged Sharpshooter carries Xylella, a disease that is causing the die-off of oleanders (and several other plant species). Xylella fastidiosa is a bacteria that is carried by the nasty little sharpshooter. No control has yet to be found.

Once the Oleander has been affected by the bacteria, there is nothing much else to do but to bring in the skid steer, dig them out and haul them to the dump. A sad, sad day when that happens. When the leaves obtain a yellow ring on the foliage, and after one tries to treat it for salt burn, chlorosis or other possible causes, and nothing happens, it is likely that the plant has what I shall call from here on as, DIE OFF.

People have tried several natural methods to control the pathogen, to no avail. Less frequent watering, such as long, deep water, highly mulched beds have slowed down this nasty little pathogen, but the results are always the same. An unavoidable visit to the dump!

If one is fortunate enough to have “healthy looking “ oleanders growing in either a commercial or residential property, be happy. Not every oleander out there in the landscape world is going to get mauled by the Xylella fastidiosa, but be concerned about it and consider other options for the landscape. Arizona rosewood, Vauquelinia californica, is an excellent alternative, albeit a slow grower. Dodonea viscosa, hopseed bush, can also make a nice substitute.

In closing, let’s just remind ourselves one last time about the toxicity of the plant. All parts are known to be toxic. Simply put, teach the children not to play in the oleanders. Can’ be much more clear. Then there is the folktale about the Boy Scout troop dying after a weenie roast using oleander sticks. NOT TRUE!

Whether it be for a hedge or a screen, or on roads to separate traffic, the oleander is still seen everywhere. Just take into consideration that there is a good chance that the dreaded die off will attack the plant.

So, we now know the good (long-lasting blooms, super-tough plant), the bad (toxic plant parts) and the ugly (yucky-looking die off, which eventually leads to removal) about the infamous oleander. Don’t toss in the towel on this plant.

Joe Pearl is a horticulture consultant in Mesa, AZ.