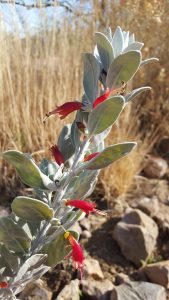 Australian Erimophilas are a good choice for the harsh conditions in the desert Southwest. Photos courtesy: Pete Duncombe

Much attention has been given to plants from Australia over the years, but the familiar pattern of introducing popular temperate species into desert regions hasn’t always produced positive results. The reality is that species from wetter and more moderated climates struggle with the harsh environment of desert environs including poor soils, extreme heat, freezing temperatures and general aridity.

More recently, Australian plant introductions have come from the interior regions of Australia’s mainland where conditions are more aligned with those of the Desert Southwest apart from the freezing temperatures of certain regions.

One group of plants that have enjoyed considerable success are the Eremophilas. Similar to another familiar genus, the Leucophyllums, of the Chihuahuan Desert that blew up the plant palette of low water landscapes in the late ’80s and ’90s, the Eremophilas, also of the Scrophulariaceae, burst on the scene in the last decade or so with many new species and varieties being introduced over the last several years.

The genus Erimophila has more than 200 species that are endemic to Australia’s inland and primarily arid regions. Erimophila emanates from the Greek, eremos, Desert and phileo, to love. These desert loving species are a perfect match for the arid conditions of the Desert Southwest.

Erimophila glabra, the common emu bush, is a highly variable species. It occurs in several different forms throughout the mainland states of Australia over a diverse array of soils and vegetative relationships. Moderate to little water and good drainage are required. Its forms vary from more prostrate to upright and spreading to six feet. The leaves may be glaborous (without hair) as the name suggests, or may be densely hairy, giving them a grayish appearance.

The low, spreading prostrate form with yellow flowers is hardy and performs well in the landscape as a groundcover.

Another variety called ‘Murchison River’ is a silvery form with red flowers that grows to about three feet high. The later is sold under the trade name, ‘Fire and Ice’ and is best suited to dry temperate regions. It thrives on open sunshine, and good drainage, tolerating extended dry conditions and even moderate frost.

The flowers are red, orange, yellow, or yellowish green, lack spots and are arranged singly or in pairs in the leaf axils on a stalk which is approximately a half0-inch in length. The striking flower color comes from the petals, which are fused at the base to form a corolla tube with five lobes at the end. The Eremophila Fire and Ice has heavy blossom at the end of winter and in spring, enjoyed by hummingbirds. It blooms sparsely the rest of the year.

Propagation is generally successful from cuttings, but seed propagation is more complicated. It involves either sowing the fruit in the ground or trying to extract the seeds from the fruit without damaging the seed, which is difficult.

Eremophilas are made for the desert southwest because they are so drought and heat tolerant and stand up cold down into the high teens. Choose different varieties and plant them so you have year-round blooms. The virtues of these bushes cannot be stated strongly enough. The addition of these and other Australian species with similar characteristics, in the landscape provides some new ways to add new and different plants to the landscape that are attractive and use minimal water.

Pete Duncombe is the owner/operator of Trident Landscape Management in Las Vegas, NV.