As the days get longer, it’s time to think about spring transition. Research in the last 15 years shows that the cultural management practices of 30 years ago do not work (like they used to).Vertical mowing, aerification, and irrigation deprivation don’t get rid of the ryegrass evenly anymore. So what’s left?

Herbicides have come to the rescue!

Old standby chemicals include sulfonyl urea (SU) herbicides such as Manor (metsulfuron) and Corsair (chlorsulfuron), which were released for weed control in warm season grasses almost 30 years ago and still available for sale. It is getting harder to find Manor.

Kerb herbicide (pronamid) has been around for a long time as well. It works differently on ryegrass than the SU herbicides . Kerb moves readily with surface water, so be careful about irrigating sloped surfaces and compacted areas that have slow infiltration rates.

The thiencarbazone is not a SU herbicide, but it affects the same enzyme target system. These herbicides block the protein-making ability of the ryegrass, but not bermuda. After a spray application, the grass will stop growing in just a few days. After that, the ryegrass turns straw.

The rate at which the ryegrass dies is related to several factors. One is the temperature . In early April, it’s not warm enough for the ryegrass to have a strong reaction to most SU herbicides. The effect will wear off, and another application is needed (now, at twice the expense).

Studies have shown that for most SU herbicides, applying the herbicide as a transition aid before the bermuda is at 70 percent green up on its own often leads to a slow and uneven removal of the ryegrass. Therefore, it is a good idea to leave some non-overseeded turf around the facility to use as gauge for a timely application.

For bermuda In the low deserts, applications in mid- May should result in better transition than in mid-april. Certainty and Manor are slow to remove ryegrass in colder temperatures (50 F nights), than when the nights are closer to 60 F (as the daily low temperature). The trick is to apply the herbicide when it’s warm enough for bermuda growth and apply a rate of the herbicide which will not work too fast on the ryegrass.

At the high label rate for ryegrass transition, Monument, Katana and Tranxit can cause the greatest amount of straw ryegrass quickly. Revolver is intermediate and Manor tends to produce the least. There is no magic bullet. 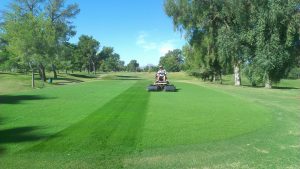 If you wait “too late”, for example by late June, the gain in ryegrass removal still occurs, but it’s often not a whole lot greater compared to not applying the herbicide at all. You may only gain a 20 percent increase in bermudagrass by late July cover by applying it “late.” So, long story short, it is generally effective to apply most of these SU herbicides from the first week of May, to the first of June.

An existing broadleaf herbicide named Sapphire (penoxsulam), is being used for ryegrass removal in bermudagrass. The active ingredient is slow to work, but the transitioning ryegrass is more attractive and less-straw like. Two applications are allowed. Many superintendents are making an “early application”, followed by a second application 20-30 days later. How early is early? Perhaps as early as April 1 in the low elevation desert. The jury is not in on what are the ideal temperature ranges to start a two application program.

The second component of the speed of transition and the magnitude of visible dead ryegrass is the applied rate of active ingredient. The labels will often provide a range of rates for ryegrass transition. The higher rate will almost always increase the exit speed of the ryegrass, but this can increase the appearance of straw-colored ryegrass blades and shoots. The label rates recommended on these herbicides when selected for ryegrass transition are a balance of ryegrass removal, grass aesthetics during the process, and to some extent, safety for the returning bermudagrass.

The third component is active ingredient itself. From observed experience, at label rates, Tranxit and Katana both generally produce a quick transition with moderate straw production on the ryegrass. Kerb will turn the ryegrass a unique, attractive and memorable slate blue color, followed by the onset of necrotic straw.

When reading the label, it will state that most SU herbicides have both foliar and soil activity. Some of these herbicides can be easily tracked and move to nearby turf. To play it safe, let the application dry on the leaf before driving carts, equipment or experiencing foot traffic. Then water that night. If you don’t, the moisture on the leaf the next morning can still have the free herbicide with it, which can be spread mechanically again via wet-tracking.

So in a nutshell, it’s important to

(1) stay off the turf at least 8 hours after application,

(2) irrigate that night after the 8 hours is up, and

Each product should have instructions on the irrigation interval requirements.

These SU herbicides call for different types of surfactants (or none at all). MSO methylated seed oil is not the same as a standard non-ionic surfactant. Neither is a crop oil concentrate. The proper surfactant is listed on the product label.

Finally, read the label for spray tank pH requirements. Out west, the water pH is almost always 7.8 to 8.2 (or more). The high water pH can relay shorten the life of the active ingredient, even while just in the spray tank! Some of these products state that better performance will occur if the pH of the spray tank is 6.0 – 6.5 or less.

An inexpensive way to decrease the pH is to add a safe acid, like kitchen grade white vinegar. Mix the product in the proper spray volume (gallons per 1000 ft2 or per acre), add the surfactant, and then test the pH. Use color grade pH paper, or a hand held pH meter (about 100 dollars or less). Add a little vinegar at a time (1/2 pint in a 100 gallon spray mix) and recheck the pH. Add acid as required to get close to the pH desired.

Remember, it is easy to change the pH of water! It does not take a lot of acid to lower a large amount of water, and it can happen quickly. To get a “feel” for this, simply add small amounts of white vinegar to either a 50 or 100 tank, and “practice” to see how many pints of white vinegar it takes to lower your water pH down to 6.0.

Remember that the bermudagrass season “starts” when the nighttime temperatures are above 60F (as the low temperature) for seven nights in a row. You can apply these products when the nighttime temperatures are 55F for a week. Depending on your location, that’s either an early May application or an early June application. If you wait to apply these herbicides “later” in the summer, you still get your “straw.” It depends on your use schedule at that point at what point you can or cannot accept straw ryegrass, if this is a problem. The sooner you get rid of ryegrass, the better it is for the bermudagrass.

Dr. David Kopec is a turfgrass specialist with the University of Arizona Cooperative Extension in Tucson.

← Fire and Ice and Everything Nice
Identifying the “WHY”: Taking the Focus on the Forest Message to the Next Level →