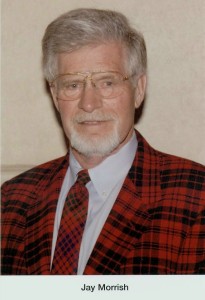 lf Course Architecture is a very subjective field of endeavor, and that is good.  The game of golf would be distressingly boring if all golf course architects embraced similar design philosophies. Long live diversity!” Jay Morrish, ASGCA Fellow

Jay Morrish, a Past President and Fellow of the American Society of Golf Course Architects (ASGCA), died March 2, 2015. He was 78. ASGCA members and the golf industry will remember Morrish’s design work around the world, as well as his service to ASGCA and the game of golf.

Morrish received a degree in landscape and turf management from Colorado State University, then soon joined the construction team on the Robert Trent Jones-designed Spyglass Hill course in Pebble Beach, California. He continued to work as construction superintendent on Jones’ courses until joining Desmond Muirhead as a designer in 1967.

Morrish then went to work as a designer with Jack Nicklaus, ASGCA Fellow in 1972. After 10 years he went off on his own with PGA Tour player Tom Weiskopf. Their 12-year partnership generated some two dozen high-profile courses, including Loch Lomond in Scotland.

In the mid 1990’s Morrish went completely on his own and designed many new golf courses including Tehama for Clint Eastwood in Carmel, California; Stone Canyon, Tuscon, Arizona and Pine Dunes, Frankston, Texas. All of these were done with the assistance of his son, Carter Morrish.

“Jay Morrish was a stalwart who was admired by everyone,” ASGCA President Lee Schmidt said. “His work was outstanding, and he was funny and smart. As an architect, he positively impacted the world of golf course design, and as ASGCA President he advanced the organization. When Jay spoke, people listened.”

Morrish became an ASGCA member in 1989 and served as President in 2002-03. Taking over shortly after the attacks of Sept. 11, 2001 provided a unique set of challenges, he later recalled.

“The United States was still in shock and we were all exploring uncharted waters as to ways of communicating, traveling and doing business,” Morrish said at the time. “Thankfully, ASGCA members were a strong group with great imagination and perseverance.”

Morrish is survived by his wife, Louise; children, Carter and Kim, son-in-law, Brian Coder; and grandchildren, Megan and Spencer Coder.

← Let’s Do Lunch with the ANA!
Mature Gardening →