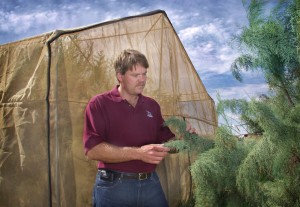 Over the last six years, four species of salt cedar beetles in the US have entered New Mexico, the first state in the nation to make that claim.

“My guess is that, by this time next year, beetles will be in almost every population of salt cedar trees in New Mexico. They have been spreading very rapidly,” said David Thompson, NMSU associate dean and director of the Agricultural Experiment Station System.

The United States Department of Agriculture Agricultural Research Service and several universities from Africa, China, Greece and Uzbekistan, among other countries, introduced diverse populations of salt cedar beetles in different parts of the western U.S.

Salt cedar beetles were released in New Mexico in 2002 on the Pecos River as biological control for salt cedar, an invasive, foreign plant that has become the predominant vegetation along the banks and streams.

This nonnative tree was brought to the United States from Eurasia as a nursery plant in the middle of the 1800s and was moved into the western part of the country in the early 1900s. Salt cedar spreads quickly, and after years of research, it was found that this bush was not of much use and competed for water with native vegetation.

“It was introduced in this part of the country for its benefit in protecting erosion in stream banks,” Thompson said. “Unfortunately, it has formed dense stands, dominating riparian areas, especially along the Rio Grande.”

It takes salt cedar beetles, which were studied for almost 20 years before being released in New Mexico, around seven years of defoliation to kill a salt cedar tree and there is no indication that they significantly damage any other plants.

“For many years, farmers, ranchers and other land managers all over the West have attempted to control salt cedar with fire, heavy equipment and herbicides, used singly or in combination,” said Carol Sutherland, NMSU Extension entomologist. “But these methods are costly, labor-intensive and limited to accessible areas. And still, salt cedar comes back.”

People living near these infestations have complained about finding beetles in their fields and houses – incidents that have recently happened in Carlsbad and El Paso.

“When these beetles are sweeping through an area for the first time they are spectacular – they can defoliate an entire forest in weeks, so you can imagine how it will be with so many beetles concentrated in one spot,” Thompson said.

Another concern is that the elimination of the trees will further impact the Southwestern willow flycatcher, a federally listed endangered specie that has adopted salt cedar as a nesting site.

“If the beetles defoliate salt cedars while the birds are nesting and raising their offspring, the birds could be more exposed to high temperatures, bright light and predators resulting in higher mortality,” Sutherland said.

This concern led to a lawsuit from the Center for Biological Diversity against the USDA, which, in 2010, halted all USDA-funded salt cedar research.

“New Mexico is now the center of all issues associated with the salt cedar beetles primarily because we have the biggest population of nesting Southwestern willow flycatchers in the middle Rio Grande area – from Albuquerque to Las Cruces,” Thompson said. “As a researcher, this is a sad time because we are right in the middle of a massive ecological event with no funding to document the progress.”

Sutherland has been tracking salt cedar beetles for the past two years. She’s using specimens she and others find throughout the state to teach county agents, farmers, ranchers, gardeners and the general public about the beetles and what they are doing.

“Among the things we don’t know is what will happen when two species of salt cedar beetles meet somewhere in New Mexico. We do know that some will hybridize, but we don’t know what their offspring might do or whether they will be viable,” she said.

Sutherland explained that “as salt cedar’s grasp on the land is reduced, other plants will quickly take its place. Citizen groups in Colorado, Utah and elsewhere have developed and implemented projects to replace salt cedars with more desirable, native species such as cottonwoods and willows that used to be the common riparian forest in the West.”

Angela Simental is a news writer at the Las Cruces Campus of New Mexico State University.