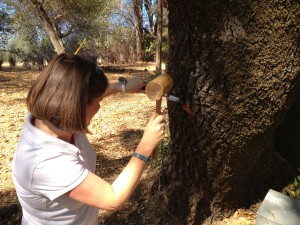 We call them invasive species. The invaders, new pests and diseases that can kill our trees, are headed our way. Some have already arrived.

Invasive species, a hot topic across the nation and even across the continents, are a real and immediate threat to our landscapes and our forests. Insects and diseases are killing trees in other parts of the country and they could easily be moved to the west.

Many of the most serious threats are diseases that are transmitted (vectored) by insects such as the Asian citrus psyllid which carries the deadly citrus disease, Huanglongbing (aka citrus greening) or the deadly tree disease laurel wilt, vectored by a beetle that bores into the tree. Some other deadly tree pests, such as emerald ash borer or Asian longhorn beetle, do not introduce a pathogen, but kill the trees none the less.

Many of these threats are known to be moved from one location to another in firewood and in wood used in wood carving or other wood crafts. (Commercially available lumber, heat and or pressure treated with the bark removed is usually not a threat.) The most recent evidence of this type of movement of a deadly insect pest was the discovery of emerald ash borer killing trees in Colorado, a major jump from the eastern states where it is known to be established. Live plants, infested with insect pests or infected with plant disease, are another common means to move a problem long distances.

It is hard to say which of these threats is the worst, as all of them can be lethal, therefore each could top the list of pests and diseases we should be watching for and will make every effort to keep out.

Laurel Wilt, caused by the fungus Raffaela lauricola which is carried by the redbay ambrosia beetle (Xyleborus glabratu), was discovered in 2002 to be killing redbay trees (Persea  borbonia) in the forests of Georgia. In 2007, it was found Florida. Unfortunately, a wood carver visiting Georgia took a large piece of the beautiful hardwood redbay to his home in Florida. Within two years he noticed his avocado tree was dying; it was diagnosed with the laurel wilt pathogen. Research has since demonstrated that a mature avocado tree can completely die within six weeks of being infected with the fungus. The disease now threatens the avocado groves in Florida and could easily be moved westward in infested firewood.

Huanglongbing, known in Florida as citrus greening (vectored by the Asian citrus psyllid), is a deadly bacterial disease of most all citrus varieties. Once the pathogen is acquired by the psyllid it will transmit the disease for the rest of it life, each time it feeds on a tree. Once the tree in infected with the pathogen, it can die within five years while the fruit becomes unpalatable and early fruit drop occurs. The disease can also be transmitted through grafting, making it critically important to insure the source of budwood and nursery stock is certified free from diseases.

Some diseases and pests have worked their way into our landscapes and forests already, despite efforts to keep them out. In many cases of late, pathogens have been found that were not on anyone’s radar at all; total surprises that are new and undescribed. It is difficult to point to one reason for these new discoveries, but it is generally agreed upon that the increased global movement of plant materials through traditional pathways and the new pathways provided by the internet are a major factor.

Phytophthora ramorum, the cause of sudden oak death, is one example of a newly discovered pathogen in the coastal forests of California and Oregon. The pathogen, categorized as a “water-mold,” thrives in cool, moist climates and has caused the death of thousands of oak and tanoak trees. Large bark cankers form, killing the cambium and ultimately girdling the tree. It is also found causing foliar damage on California bay laurel and other forest species, as well as on over 100 species of ornamental plants. The general belief is that the pathogen was transported to the west coast on nursery stock.

Alder canker, another new disease recently found killing alders in the landscape, is caused by Phytophthora siskiyouensis. First identified in Oregon, the disease has now been found in several locations in California. The symptoms is a bleeding canker on the trunk and upon shaving off the outer bark, dark brown patches of dead tissue are exposed.

Foamy bark canker on live oak was found in southern California during the surveillance for Laurel wilt disease. Vectored by the western oak bark beetle, the fungus Geosmithia pallida also causes cankers on the tree trunk. Instead of sap bleeding out of the canker, foamy fluids come bubbling out for a period of time after the beetle bores into the tree.

A related disease, thousand cankers disease of black walnut caused by Geosmithia morbida, is also vectored by a tiny beetle, the walnut twig borer, which bores into the branches or trunk  black walnut trees. The beetle carries the fungus on its body and when boring into the wood, deposits the fungus on the tunnel walls where it grows into the wood causing the cankers. The beetle attacks the tree in many places, causing “thousands” of cankers which girdle and kill the branch or tree. Although this disease was first found killing Colorado street trees and is now found in several states across the country, intensive studies indicate it originated in California.

Another new disease, also found in Southern California while surveying for laurel wilt, is Fusarium dieback. Vectored by the polyphagous shothole borer, Euwallacea sp., the fungus causes many, small cankers that ultimately can kill branches and trees.

New diseases and pests are plaguing our plant world and it is up to all of us to stop them from getting into our landscapes. Early detection of these problems is critical if we are to control or eradicate them. The movement of wood, firewood, nursery stock and other products that can harbor pest and disease happens daily.

Our mission is to critically inspect newly acquired plant material before installing it into the environment. Do not accept infested or infected materials. If you find something you’ve “never seen before,” call your area specialists or department of agriculture to have it identified.

Spread the message to all your clients too! If they see something strange or plants start dying, have them contact you. And above all, DON’T MOVE FIREWOOD!! The beetles that kill trees all on their own, with no help from pathogens, are of great concern and they are easily transported in firewood. Spread the word. Stop the spread!

Kathy Kosta is a plant pathologist with the California Department of Food and Agriculture in Sacramento, CA.