Even bermudagrass, the king of warm season turf grasses, has its limitations. When temperatures drop below 50F for extended periods of time, its ability to maintain recuperative growth is very much diminished. Luckily, there’s perennial ryegrass to save the day. Just throw some on the top of the bermuda and all your problems are solved. It’ll die next spring as “soon as it gets warm.” In the words of Walter Kronkite, “that’s the way it was” and that’s what was true about 30 years ago!

Today, ryegrass lasts longer than ever, so you end up with long and lingering stands of mixed ryegrass/bermuda often well into the summer. Not to mention that the aggressive overseed prep in the fall hurts the bermuda for the next spring! Here are some conditions that are not good for the bermuda in the fall.

Aggressive dethatching at overseeding: Cut stolons which are removed in the process are “lost 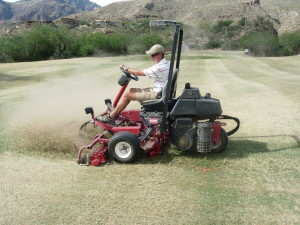 Overseeding is a little trickier than in the past because perennial ryegrass is much more persistent.
Photo courtesy: David Kopec.

growing points” for next springs transition. Aggressive vertical mowing removes 80%-85% or more of the stolon buds. The only place the bermuda grows back is from rhizomes buds. Bermuda has way more stolon buds in a square foot of surface turf than rhizome buds.

Early overseeding: Overseeding when the bermuda is still actively growing allows (forces) the bermuda to grow back. This occurs at the immediate expense of  food reserves in rhizomes, crowns, and remaining stolons.  After it grows back again, the plants have little or no food reserves for the wintertime and even less for next spring’s oncoming  bermuda! The result is often poor fall establishment because of the direct competition from bermudagrass and poor spring transition from a tired out bermudagrass plant from the “spring get go.”

Aggressive dethatching with an early overseed: This is probably the worst case scenario and you just have to read why!

Too “late” an overseed: This is not a problem for bermudagrass per se, but couple it with an aggressive dethatching/vertical mowing and you’ve got severely damaged bermuda that will have open wounds all winter long. This comes at an “energy” price as well. When late spring rolls around there are often not enough food reserves left for the spring push. The result – bad spring transition.

The take-home message is that you should minimize damage to the bermuda at overseed preparation and optimize the overseeding success by planting at the right time: when the bermuda is not growing actively and when soil and air temperatures are favorable for ryegrass overseed emergence and establishment. Unfortunately, the turf manager looses the battle to scheduled events as to when the “best time” to overseed occurs.

If a “too early” overseed is in the works, there is one PGR and one herbicide labeled for use as a growth limiter for bermudagrass at overseed time. The first is Primo PGR. Primo is about the best PGR for safely stunting bermudagrass with minimal to none discoloration. Not only will it “stunt” bermuda, it also makes the leaves closer together on the stems.

Therefore, if you are applying Primo as part of the overseed program, you have to take into consideration that the grass will be “tighter” and may be even more denser than before. Raise the mowing height before you apply Primo…that’s the take home rule. Label rates for overseeding use run from 0.25 to 0.50 ounces/product/1000 ft2 on bermudagrass.

Turflon ester is a herbicide for post emergence broad leaf weed control in cool season grasses. Since it does discolor bermudagrass, it’s not labeled for regular use during the summer season. But the supplemental label does have legal rates for use in overseed preparation. Use 12-16 fl oz/acre 2 to 5 days before overseeding. The discoloration is not an issue at overseed time. Do not scalp the grass before applications of either Primo or Turflon ester if either is used for overseed preparations. These products need to be taken up and moved within the plant so they can cause the reduced growth responses.

The choice of grass for overseeding for sports fields, fairways, roughs, most home lawns and other general areas lies basically with ryegrass. Perennial ryegrass is by far the most common used.

Because of the inherent spring transition problem associated with heat tolerant ryegrasses, some seed companies have developed and marketed what are called “hybrid” or “intermediate” ryegrass cultivars. These grasses usually die out in the spring “halfway” between the time annual ryegrass fades away and perennial ryegrass dies.

First releases of hybrid ryegrass were more like annual ryegrass in appearance. These included the varieties of Froghair, Transtar, and Midway. Newer varieties such as Transist 2600, TransAm, Transfix are finer in texture, more uniform in appearance, and darker in color than other “intermediate” ryegrasses used for overseeding. They tolerate mowing at 1/2 inch and upward quite well. For bermudagrass greens, Poa trivialis is almost exclusively used with a little ryegrass sometimes added as a mixture.

In the last five years, improved turf-type annual ryegrasses have been developed for commercial sale. Check with your seed dealer and ask to see University test results, as some are not that much better than standard annual ryegrass, while others have much better turf attributes.

The next item to consider is how much seed you can actually expect to get to germinate out of a 50-lb. bag. That’s because not everything in the seed bag is actually a seed (purity issues) and not every actual seed will always germinate (germination issue).

On every bag of seed is a seed tag. It is a legal requirement! One of the items on a seed tag is the Pure Live Seed (PLS) content. The PLS stands for the percentage of seed by weight.

How many pounds of the 50-lb. bag will germinate under ideal conditions? PLS is calculated already for you. It is the percentage of Purity, multiplied by the percent germination, determined in a seed lab. So if a seed bag is 90 percent pure (10 percent is broken seed cases, stems, and soil) and has 80 percent germination (8 out of 10 seeds will germinate), what is my Pure Live Seed amount? PLS becomes .90 (purity) X .80 (germination) = 72. Therefore only 72 percent of the seed will ever germinate under ideal conditions. So my 50 lb. “bag of seed” is actually only 36 lbs. of seed (= 50 lbs. X .72). If you buy seed on the total weight of 50 lbs. per bag, your seeding rate will be off!

So, how do you adjust your seed purchases based on Pure Live Seed? First, figure out how many square feet (or acres) you want to overseed. If you have two acres and want to overseed at “600 lbs.” per acre, than you need 1200 lbs. of seed.

The next decision is the overseed rate going to be. This varies tremendously from as little as 300 lbs./acre to 850 or more lbs./acre.

In the “old days” many superintendents overseeded at high rates (750 lb./acre or higher) in order to get a good spring transition. This was because the ryegrass plants were never really mature due to the high seeding rate. You would end up with lots of “thin plants” with only 2-3 tillers at most per plan, even in the spring. These would die if anything happened to them like drought, or vertical mowing. That doesn’t happen so easily anymore!

Higher seeding rates give you better fall turf, but there’s a price to pay in the spring! At seed rates above 650 lbs. PLS/acre, the ryegrass hangs on for a long time and then suddenly collapses. This leaves almost a full canopy of straw and it takes a long time for the bermuda to fill in afterwards.

The low seeding rate of 400 lbs. PLS/acre was one of the two seed rates which had good spring transition. However, the 400-lb. rate did not have a high level of quality in the fall.

It turns out that seed rates of 600 or 625 lbs. PLS/acre had the best spring transition and a good quality for the entire season. Many superintendents now seed perennial ryegrass at 600-650 lbs. PLS/acre and have had consistently good results.

David M. Kopec, Ph.D. is a turfgrass specialist with the University of Arizona in Tucson.

← City Trees and Infrastructure
Focus on the Forest, Not the Trees: A New Perspective for the New Year →