In May and June of 2015, The Los Angeles Times published articles addressing the problem of crumbling sidewalk infrastructure within the City of Los Angeles. The articles focused on the challenges pedestrians face in this car-dominated city. After years of mounting complaints and lawsuits caused by defective, dangerous sidewalks, city officials are finally beginning to address the problems caused by trees that were planted within city parkways, medians and right of ways.

After decades of deferred maintenance, the City Council, the Mayor, and public work officials 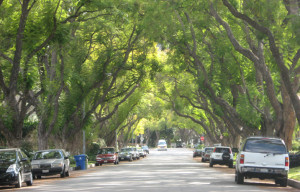 are finally turning their attention toward addressing the problem, and trying to figure out how to juggle spending requirements resulting from legal settlements and sort out who is responsible for future sidewalk maintenance, as well as liability for future injuries caused by damaged sidewalks.

The first question, who is responsible for sidewalk repair and replacement caused by trees growing within city parkways and right of ways? California state law placed the burden of sidewalk repairs on adjacent property owners.

A majority of California cities adhere to the state policy, however not the City of Los Angeles, which 40 years ago opted for a policy that made the City responsible for repairing sidewalks damaged by tree roots in city parkways. Back in the 1970s, when federal funding was available for the work, Los Angeles opted to pay for tree-damaged sidewalks. When the federal funding was depleted, voters declined to support tax increases for the repair work, leading to the current massive backlog of damaged sidewalks.

Instead of removing invasive, surface rooting tree species and replacing damaged sidewalks, the city embarked on a less expensive program of temporary asphalt patches in an attempt to smooth over displaced, uneven sidewalks. The problems continue to mount, with over 19,000 sidewalk complaints within the past five years alone. Over 40 percent of the complaints have been ignored, with no repairs having been made, mainly due to inspections never being made or the sidewalks so severely damaged they require complete rebuilding.

The City is now proposing a policy to address the situation. Under the proposed policy, neighborhood sidewalks damaged by city parkway trees would be replaced at the city’s expense. However, after repairs are completed, responsibility for repair, maintenance and liability would be shifted upon the adjacent property owner.

The proposal has received mixed comments from residential and commercial property owners. Businesses already pay taxes they assume local government should be using for infrastructure repairs. Additionally, requiring businesses to pay for repairs would harm retailers, especially in districts lined with problematic trees. Many commercial property owners would be forced to pass on the expense to the small business owners that rent the property.

Under the “fix and release” program, repairs would be made by the city, and then future responsibility for the sidewalks transferred to the homeowner. Some homeowners feel this would be an equitable solution to the current problem, other disagree, stating they would be saddled with big bills down the road, particularly if the city does not fix the “root” cause of the problem, that being tree roots or leaking utilities. 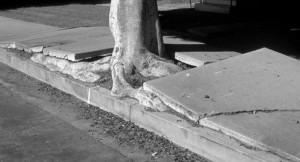 The city must grapple with both sides of a delicate issue, trying to preserve the benefits of large, picturesque trees providing neighborhood character while having to remove the same trees whose invasive roots have damaged infrastructure and would continue to do so if left in place.

To begin the process, the city acknowledged they do not really know how extensive the problem is. The city has no existing tree inventory of the tree and sidewalk condition. Without this information, it would be difficult for the city to measure progress as they attempt to implement any new sidewalk management policy.

Certified and registered consulting arborists consult with Southern California municipalities and private property owners involved in trip and fall litigation caused by tree root lifted and damaged sidewalks. Typically lifted and damaged sidewalks caused by tree roots are due to inappropriate tree selection. Species such as sycamore, Ficus, Eucalyptus and ash trees planted decades ago in restricted parkway planters were most often associated with damaged infrastructure.

Sidewalk repair or replacement without addressing the existing tree species ignores the problem. Passing on responsibility for future repairs and liability to adjacent property owners would be an unjust situation for taxpayers.

Large, surface rooting, invasive species should be closely examined for mitigation in conjunction with infrastructure replacement. Perhaps root pruning and root barriers might be an appropriate remediation that would protect future infrastructure while retaining large pre-existing species.

However, many species planted decades ago were and will always be inappropriate for confined parkways. Root pruning a large Ficus or Sycamore could easily de-stabilize the tree, resulting in a catastrophic failure. Who would be liable for a tree failure and resultant property damage, or worse, personal injury or death?

Citizens might have to accept they cannot have the best of both worlds, where large, invasive trees are retained for neighborhood character, sidewalks are repaired and the city remains responsible.

Over the decades, many newer street tree species have been developed that provide desirable growth characteristics while minimizing damaging invasive root systems and towering canopies that conflict with traffic and overhead utilities. Reasonable compromises can and should be made toward replacing older, inappropriate tree species with newer species that will provide community benefits while minimizing maintenance costs and damaged infrastructure.

Hopefully, the City of Los Angeles and other municipalities facing this problem elect to use certified and registered consulting arborist and horticulturists as they consider how to address their urban forest and infrastructure issues.