By Dr. Jacqueline A. Soule

Landscapers often face a real challenge with customers from “Back East.” Many times customers complain that they want more “green” in their landscape. Desert broom, Baccharis sarothroides, is one option for the bright green foliage newcomers crave. 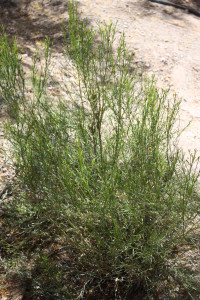 Desert broom is a medium-size, low-water native shrub and a very vigorous grower. It is often the first plant to grow on a cleared stretch of desert (or over the septic tank). Despite being bright green and tender, rabbits and javalina do not eat the desert broom in my yard. It can be handy to have such a tough plant in your landscape palette. Yes, desert broom seedlings can be prolific. But even if you do not plant it, the tiny seeds are carried by wind for miles and appear in your landscape.

Greg Corman, owner of Gardening Insights, a landscape design business in Tucson AZ, states “I think desert broom is probably the most important fall blooming plant for native pollinators – both the male and female flowers get loaded with butterflies, beetles, flies, and more.” He adds that recently he convinced a couple of HOAs to stop extirpating desert broom as a matter of course. They had previously believed that desert broom was a non-native invasive species.

Desert broom may be purchased at nurseries or can be grown from seed. In the wild, plants are generally found in rocky or sandy sites, thus avoid over-watering in heavy soils. That said, they do tolerate in heavy clay or saline soils — places where few other landscape plants thrive.

Desert broom will take full sun to reflected light, and does fine in part shade. Plants will accept shearing and can be trained into a decent, short-lived privacy hedge. Such a short-lived hedge is helpful while the longer-lived, taller, non-allergenic, but slower growing Arizona rosewood (Vauquelinia californica) or jojoba (Simondsia chinensis) reach hedge size.

Along with landscaping, desert broom is useful in a number of ways. Desert broom has a long history of use as a medicinal plant. A decoction made by cooking the twigs of desert broom is used to treat colds, sinus headache, and in general “sore aching” ailments. The tea is also used as a rub for sore muscles. 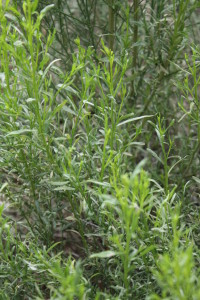 Desert broom makes a good dye for wool. Various mordants (alum, copper, iron) result in differing shades ranging from pale yellow to olive green. Desert broom can be used as filler in fresh and dried floral arrangements, with long lasting color and minimal mess since it has only a few, tiny leaves to shed. Last but not least, branches of desert broom do make a passable broom for sweeping the dirt floors of an adobe home.

All in all, desert broom is a handsome, useful, low-water native plant that attracts native pollinators, including butterflies to the landscape. Consider adding some to your next design.

Dr. Jacqueline Soule is the author of a number of books on gardening and landscaping in our unique Southwestern arid environment. Her next book is a month-by-month guide to gardening in Arizona, Nevada and New Mexico, published by Cool Springs Press and due in 2016. You can learn more at gardeningwithsoule.com.